The Salvation Army has built 118 new warm, dry, affordable community houses in partnership with the government and financed through Community Finance, an intermediary offering an innovative impact investment model to ethical investors.

Up until recently, Corey Baker (Ngāpuhi) was homeless, defeated, and miserable, with the chaos severely affecting his health and wellbeing. But after moving into a brand-new Salvation Army unit in Royal Oak in 2019 he says everything has turned
around. He’s now 18 months clean and is training in social services at Te Wānanga o Aotearoa.

“It’s a desire and a passion of mine, and I want to give back,” he says.

Corey is fluent in te reo Māori, and when he got the chance to pick a name for the next Salvation Army 22 home community housing project in Auckland’s Westgate, he chose the name Te Manaaki Tāngata, which has several meanings centred around care and love of people.

“It was an absolute privilege to give back to The Salvation Army and an honour for me,” he says. “I took some time out to think about it and went back to the legacy of Salvation Army founders William and Catherine Booth. They cared for the people and gave them what they needed. The Sallies still encapsulates looking after people, giving them hospitality, and caring really well for them.” The Salvation Army has spent many years advocating for better housing for New Zealanders, and was one of the first to raise the alarm about our growing housing crisis. As the charity watched things get worse, it continued looking after those who fell through the cracks. Moved by the rising housing crisis, now it’s taking action and has started building new, warm, affordable and secure homes itself.

“The Sallies still encapsulate looking after people, giving them hospitality, and caring really well for them.”

The first project, Te Hōnonga Tāngata, a $28 million 50-unit development in Auckland’s Royal Oak, was opened in November 2019 by Prime Minister Jacinda Ardern. It is now home to 59 people with a combination of 3 two-bedroom and 47 one-bedroom homes. It has a community focus, with lots of shared outdoor spaces, a community garden, and a community room.

Te Manaaki Tāngata, the second development, is a  $9.1 million build in Westgate and was completed in  August this year. With 20 two-bedroom homes and  two one-bedroom units, it will also have a strong community focus.

Finally, a third 46-unit development underway in  Flatbush, South Auckland is due to open. It will have 32 two-bedroom and 16 one-bedroom homes.

The charity’s national director for social housing,  Greg Foster, says the Army has always been outspoken about the shortage of housing. “We have been at the forefront of highlighting the housing crisis we are facing, and the leadership decided to back up the talk, with the action via a  commitment to building more homes wherever we can,” he says.

However, it has still barely scraped the surface of the need in the community. They recently opened a 50 unit complex and had more than 800 referrals for the 50 units.

“We are adding 50 here, 46 there, 22 here, but it’s only a drop in the ocean in terms of meeting the growing need in the community,” he says. “It costs a lot of money to build; these three complexes have cost us $50m and we are borrowing $40m  of it. The Government helps support the build by  guaranteeing rental income.” 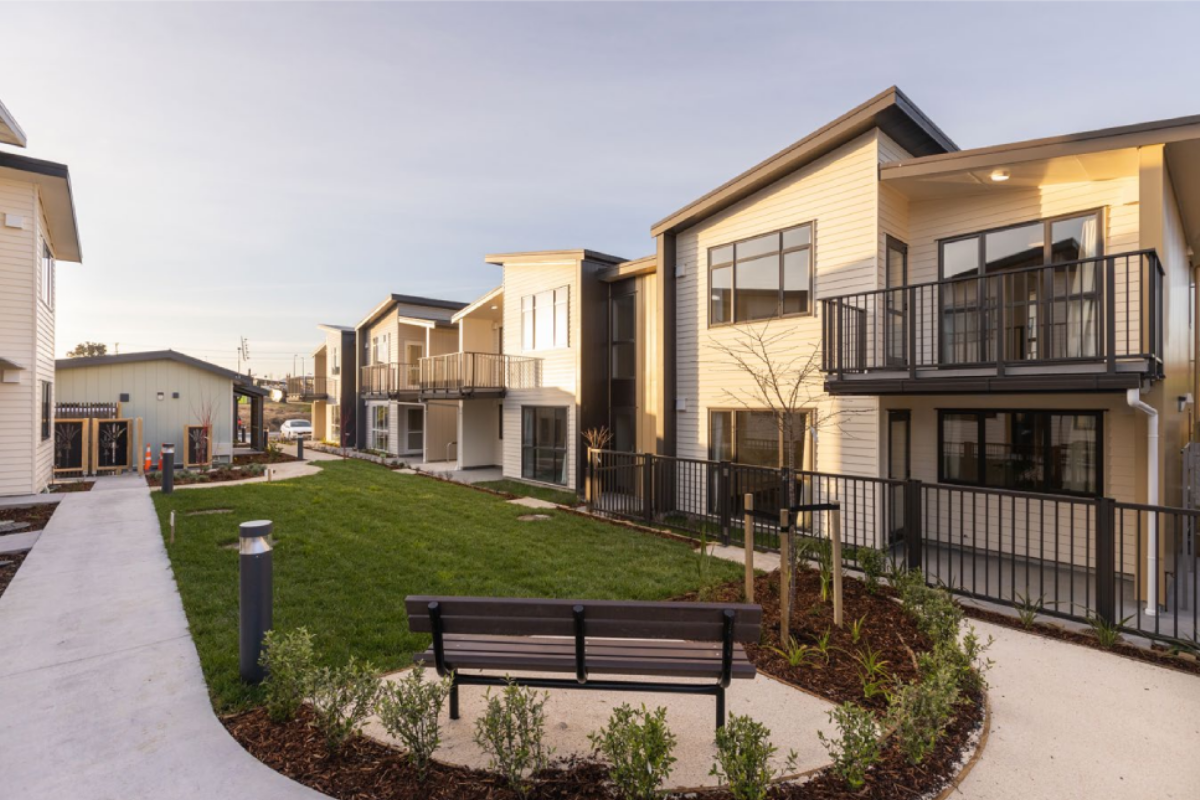 To really change the game and develop new housing stock, he says we need a radical shift in finance structures, in addition to the government supporting the rental payments for those that need support.

“I would like to see a lot more opportunities for investors out there who want to invest in schemes like this which provide a social good as well as giving them a good return,” he says.

A pathway to achieve that has been laid out by  Community Finance, an intermediary established in 2019 for social good that helped the Army finance the units. Community Finance pioneered  ‘Community Bonds’, a form of ‘impact investment’  which offers lower-cost finance to projects that improve society, like this project by The Salvation  Army, as well as providing a secure return for the investor. This creates a win/win.

Community Finance General Manager Paul Gilberd says the ethical finance framework has been “a  missing piece from the ecosystem” of community and affordable housing and investment for a long time. Up until now, New Zealand has been slower than other countries to adopt impact investment for social good at scale. Community Finance now offers a viable path to do that.

“This is money that wants to do good,” Paul says.  “It’s not focused on just making more money. With  Community Finance, an investor’s focus gets to be on both financial return and social impact. You need to be looking for values in organisations and projects that are focused not on extractive single bottom-line financial profit, but on delivering positive social and environmental outcomes.

In fact, the investors’ money helps make a better  New Zealand for everyone.  Salvation Army Senior  Tenancy Manager for social housing, Jasmine Herewini, says the value of a stable home on those who’ve been homeless is incalculable.

“For nearly everyone we’ve spoken to, they’re humbled by having somewhere they can call their own and a place to set their foundation on,”  she says. “We have a kaumatua who was on the  Social Housing Register for about five years; he came from Kaitaia and spent the last few years couch surfing. He has a disability and having  somewhere that is his own home to relax in, and  not having that fear of having to move again has  been fantastic for him.”

Meanwhile, in Corey Baker’s life, stable housing means things are going much better. It’s enabled him to settle down and concentrate on his study,  helped him become part of a community, and  “actually move forward and live my life”.

“I take responsibility for the choices and the mistakes I made, and my family couldn’t offer me a place because I’d messed up opportunities up there,” he says. “It was a situation of being totally  defeated, and really I just gave up.”

He spent some time living in an old grandstand at a rugby league park, sleeping on concrete with a lot of other homeless people and spending his days at a shelter.

“It was like this black cloud when I woke up. It was a  bad time, but it’s all turned around for me now. Now,  I can go home at night and shut my door and turn my TV on and have my own little safe space. It’s  opened up a lot more doors for me.”

I want to Invest
I want to borrow

Do you meet the criteria?

Do you meet the criteria?